along with many representatives of faculty, representatives of entreprise mentor and principals from many international high schools in Shanghai attended this ceremony. The ceremony was emceed by He Jiaxun the Chinese Dean of AEBS 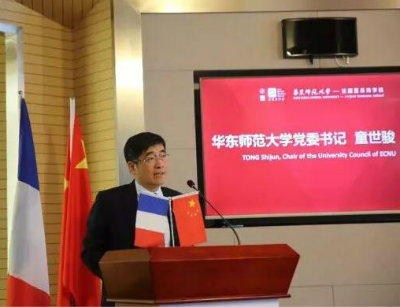 Tong Shijun, Chair of the University Council of East China Normal University said on the ceremony that, this is a moment of honor that we welcome our first year’s graduate students along with our second year’s undergraduate students.

On April 8th 2017, AEBS has officially settled in Zizhu International Education Park independently in terms of physique space and AEBS now publishes its own values, visions and missions. According to the recent ranking from Times Higher Education, East China Normal University's international education level ranked fifth in mainland China, first in Shanghai, and AEBS contribute immeasurably to this result. 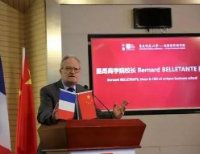 Bernard Belletante, Dean of emlyon business school, also congratulated AEBS’s freshmen, and mentioned the importance of the difference in his speech. He said that the world is composed of a variety of differences, in such a global project and cross-cultural learning, students can understand the differences in the world.

"Teachers from the West and the East have different teaching methodologies; this is not a problem, but a good opportunity to help you to more deeply understand the differences of the world." Belletante hope that we can enjoy the study here and become a qualified "world citizen". 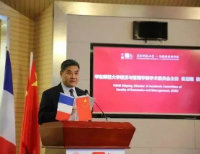 Yuan Zhigang, Director of Economics and Management Division, said that when students are facing series of new business environment and global challenges, such as economy sharing, one belt one road, public entrepreneurship, public innovation, big data, artificial intelligence and so on, what they have learned and accumulated in AEBS make the difference.

He believes that the learning experience in AEBS will help students meet their future needs. in this outstanding environment, students can better enhance cross-cultural communication and management capabilities. He also sincerely hopes that we can take advantage of the modern facilities to seek the key to the excellent future.

AEBS new entreprise mentor, Liu Chenjun CEO China of Wyndham Hotel group delivered a speech on "how to build an international career as new generation". As he has served as CEO in France, Italy and the United States, he shared lots of practical and interesting experiences with the students. He encourages them to innovate and change.

After the wonderful speeches by Liu Chenjun, Wang Hua, Dean of emlyon business school Asia, French Dean of AEBS, awarded him with a letter of appointment. 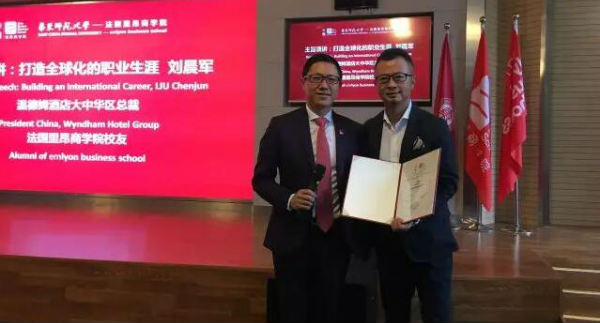